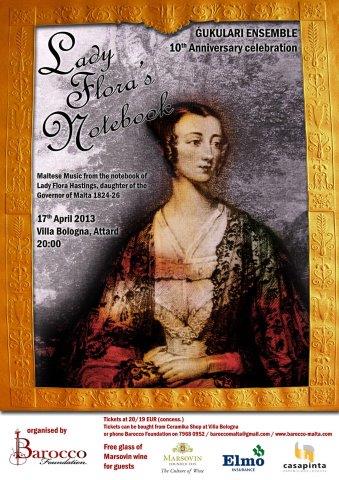 Music from Lady Flora’s Notebook is the much-anticipated forthcoming event at the stately and exclusive Villa Bologna in Attard on the 17th of April at 8pm.  The event will feature the Ġukulari Ensemble, which is committed to reviving Maltese heritage music.
The 10th Anniversary Celebration of the Ġukulari Ensemble will feature Maltese Airs from the notebook of Lady Flora Hastings, daughter of the Governor of Malta (1824-26). The event will highlight another facet of Malta’s musical legacy, which has been discovered and researched by musicologist Anna Borg Cardona and will be performed by the Ġukulari Ensemble.

The performance will give us an insight to a Young English Lady’s impressions of Malta—the exotic sounds and sights of  a foreign island. It will also give us some impressions of the  Hastings family who  lived in Malta for two years in the early nineteenth century Malta. It will be, as always, an unforgettable experience by Gukulari Ensemble and Barocco Foundation. The concert is being organized by Barocco Foundation with the kind support of Elmo Insurance, Marsovin Wine and Casapinta Exhibitions and Events. Tickets for Music from Lady Flora’s Notebook are on sale from Barocco Foundation at 20 euro. Barocco Foundation can be contacted on 7968 0952 or email at bookings@baroccomalta.com or from Ceramica Shop at Villa Bologna. Tickets to this exclusive event are very limited; interested persons are asked to book early to avoid disappointment.  Guests will be invited to a complimentary after-concert excellent glass of Marsovin wine!