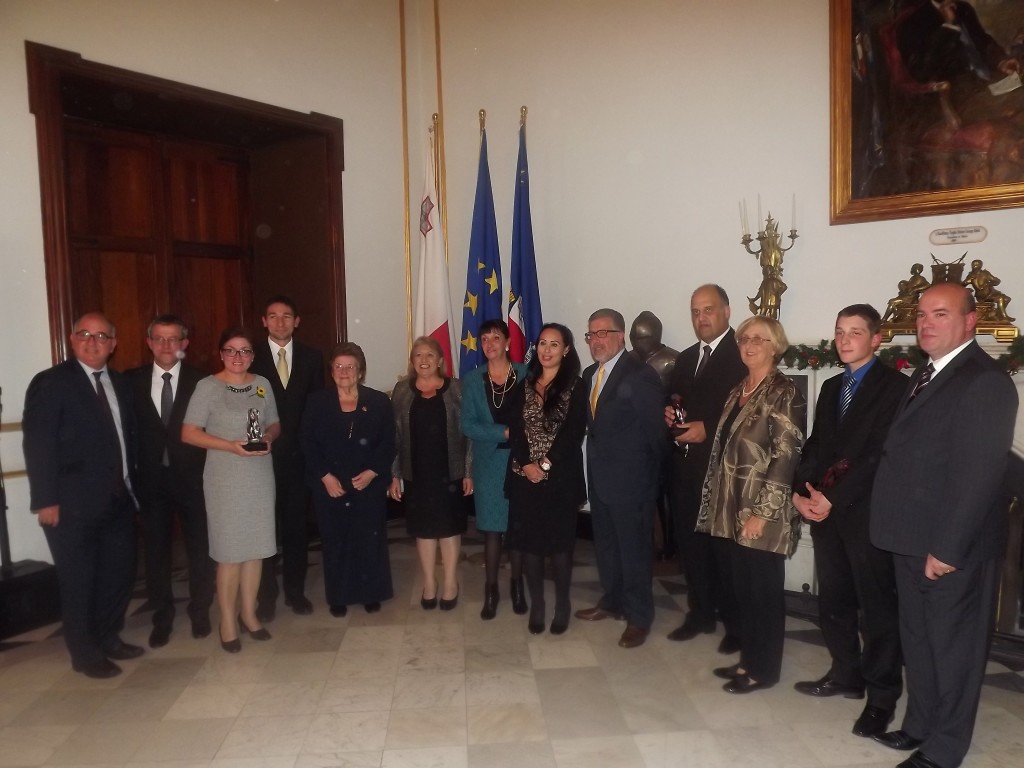 The aim of the National Awards is to give broad recognition to the service done by the volunteers and Voluntary Organisations within the community, create awareness of the exemplary values displayed by the volunteers and organisations with the goal of locating role models for youth and wider society; and to recognise the important contributions made in various fields.

The Award Ceremony was held on the 9th of December 2014 at the Presidential Palace where the Awards were presented by H.E. the President Marie Louise Coleiro Preca accompanied by Mr. Nathan Farrugia, Chairperson of   the Malta Council of the Voluntary Sector.

The National Volunteer Award is aimed to award individual volunteer who has contributed in any field, such as social, humanitarian, health, ecological, cultural, education, sports, etc.  The voluntary work must have had a positive contribution towards a particular field and should ideally have served as an inspiration to others. This year’s National Volunteer Award went to Ms. Gemma Sirol who has been a volunteer since the age of 11 years. She has been an active member since 1967 and currently she is the Commissioner of St. John Ambulance, serving also as a volunteer in various committees both in her local community and also on Government Boards.

The Volunteer Organisation Award which is awarded to a Voluntary Organisation who has been outstanding in the sector in which it operates, being both innovative in its approach and services within the community as well as in its way of recruiting and supporting volunteers, was awarded to Hospice Malta.  Hospice Malta provides palliative care services to patients suffering from cancer, Motor Neuron Disease, end of life respiratory, cardiac and renal disease. Through continual improvement and investment in its resources, Hospice Malta aspires to continue providing high quality end of life care and Bereavement support. Volunteers at Hospice Malta are an integral part of the Organization as it cannot function without the input of the over 200 volunteers who are involved in all sectors of the Organization.

The Youth Volunteer Award which is awarded to a Volunteer between the age of 16 and 30 years and is aimed to promote volunteering amongst young people was awarded to  Mr. Gabriel Hammet who is a volunteer with the St John Ambulance and who dedicates most of his free time to cover as many duties as possible sometimes attending to more than one duty on the same day even when call on short notice.

The last award was the Corporate Volunteering Award which is intended to award that Company or Organisation coming from the Private Sector which has given tangible support to the Voluntary Sector, both by direct support as well as by supporting and facilitating its employees to volunteer. This Award went to HSBC Malta Bank p.l.c who as an employer encourages employees to become more involved in the community as volunteers and supports them in these efforts. It involves creating a work environment where volunteer activity is valued and encouraged, with a belief  in community relations, aiming  to have  a good understanding of community issues and is senstive to comunity needs.

During this event, which was presented by Ms. Fiorella Pace, singer Kurt Cassar interpreted three songs, one of which was the song ‘Inservi’, dedicated to volunteering.  Musician Michelle Paris also gave a beautiful display on the Celtic Harp, with a repertoir of music varying from local traditional songs to Christmas carols.