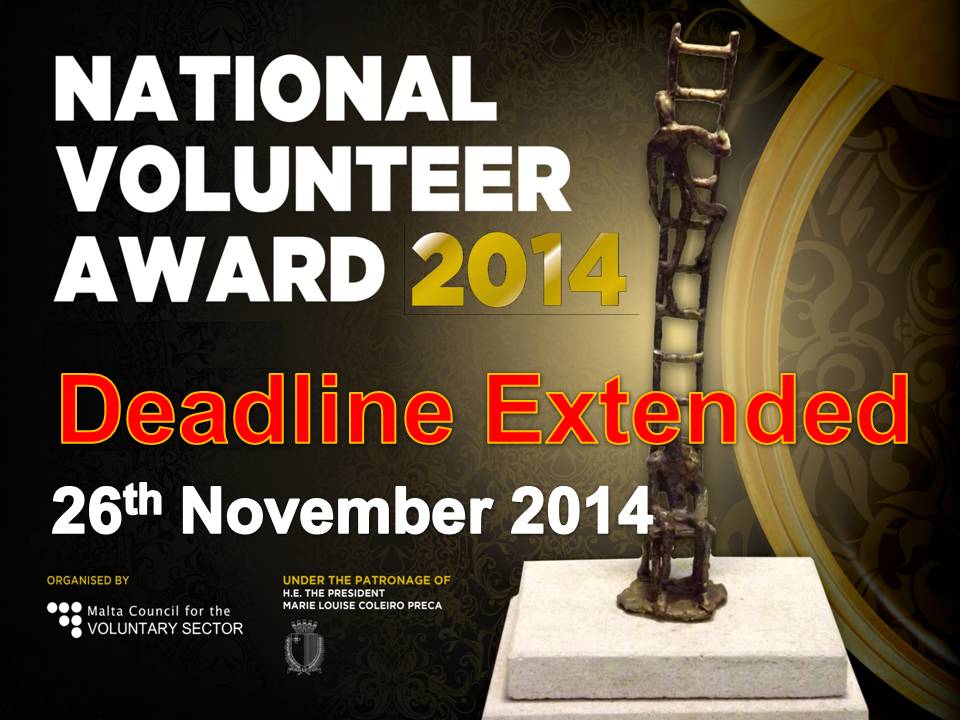 The Malta Council for the Voluntary Sector has today launched the National Volunteer Award for 2014.

As from this year this National Volunteer Award shall be held under the patronage of H.E. the President Marie Louise Coleiro Preca and will be organized in collaboration between the Office of the President of the Republic and the Malta Council of the Voluntary Sector.

The National Award will as from this year be complimented by another three sub awards which are the Youth Volunteer Award, the Volunteer Organisation Award and the Corporate Volunteering Award.

The National Volunteer Award shall be awarded to an individual volunteer who has contributed in any field, such as social, humanitarian, health, ecological, cultural, education, sports, etc.  The voluntary work must have had a positive contribution towards a particular field and should ideally have served as an inspiration to others.

The Youth Volunteer Award is a new proposal which shall be awarded to a Volunteer between the age of 16 and 30 years.  This award shall have the same aims as the National Volunteer Award and has the main scope to promote volunteering amongst young people.

The Volunteer Organisation Award is also a new proposal andshall be awarded to a Voluntary Organisation who has been outstanding in the sector in which it operates, being both innovative in its approach and services within the community as well as in its way of recruiting and supporting volunteers.

The last award shall be the Corporate Volunteering Award which shall be awarded to that Company or Organisation coming from the Private Sector which has given tangible support to the Voluntary Sector, both by direct support as well as by supporting and facilitating its employees to volunteer.

Nominations for the Award shall be received by the Executive Secretary MCVS on behalf of the Evaluation Board by the 26th November 2014. The nominations must be signed by at least two persons who have been closely associated with the nominee or the nominated organisation through work or other activities.  Each nomination must clearly show briefly the work undertaken by the nominated person/entity to merit such an award.

The awards shall be awarded by HE the President of the Republic during an Award Giving Ceremony at the Presidential Palace, in Valletta in the presence of the  Malta Council for the Voluntary Sector on the 9th of December 2014 at 6.30 p.m.  The date needs as yet to be confirmed.