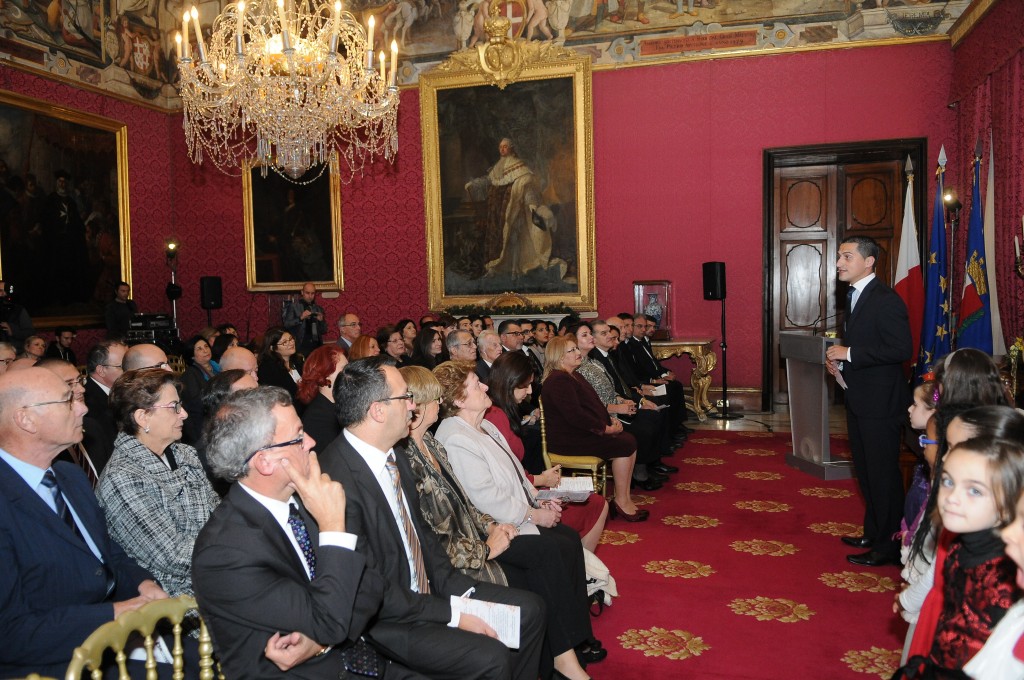 Following the successful Leadership Conference organized by The Malta Council for the Voluntary Sector (MCVS) last week, yesterday (the 10th of December) the MCVS presented the National Volunteer Award 2015 during an award giving ceremony held at the Presidential Palace in Valletta under the patronage of H. E. the President of Malta, Marie Louise Coleiro Preca and in the presence of the Hon. Minister Helena Dalli, Minister for Social Dialogue, Consumer Affairs and Civil Liberties. The aim of the National Award is to give broad recognition to the service given by the volunteers and Voluntary Organisations within the community, create awareness of the exemplary values displayed by the volunteers and organisations with the goal of locating role models for youth and wider society; and to recognise the important contributions made in various fields. Whilst the nominees and winners were a select group, the aim of the award is to symbolically recognise all volunteers in a wide range of sectors, from culture, social and healthcare, education to environment. This recognition was emphasized by Her Excellency President Coleiro-Preca who particularly encouraged the uptake of volunteering by younger generations as a way to increase social cohesion and civil society. Her Excellency remarked on the substantial sociology-economic value the Voluntary Organisations add to our country and encouraged greater measurement and appreciation of this contribution to our economy. Her Excellency wished all those present success in their work in the community.

Minister Dalli, in her speech, recognized the work of the Malta Council for the Voluntary The Chairperson of the Council, Nathan Farrugia spoke about the importance of volunteering as a safeguard for society values, primarily in teaching our children the importance of altruism, care for others and a move away from materialism. He thanked all the volunteers for their role in keeping our society’s positive values string, through the gift of their precious time and sharing positive energy.

The National Award is given to an individual volunteer who has contributed in any field, such as social, humanitarian, health, ecological, cultural, education, sports, etc.  The voluntary work must have had a positive contribution towards a particular field and should ideally have served as an inspiration to others.

This awards is complimented by another three sub awards which are the Youth Volunteer Award, the Volunteer Organisation Award and the Corporate Volunteering Award.

The Youth Volunteer Award is awarded to a Volunteer between the age of 16 and 30 years having the same aims as the National Volunteer Award and the main scope to promote volunteering amongst young people. The Volunteer Organisation Award is awarded to a Voluntary Organisation who has been outstanding in the sector in which it operates, being both innovative in its approach and services within the community as well as in its way of recruiting and supporting volunteers.

The board of adjudication was composed of Dr. Noel Camilleri, Ms. Myrna Azzopardi and Ms. Maria Carmela Borg. The National Volunteer Awards were given as follows: Commendation Award under the Voluntary Organisation Award was given to Reaching Cambodia.

The main award is a bronze sculpture designed by the artist Damian Darmanin. During the event the children’s Choir Diversitarte  under the direction of Ms Giselle Grima sang a number of songs and Christmas carols for the occasion.

The event was presented by Mr. Keith Demicoli.