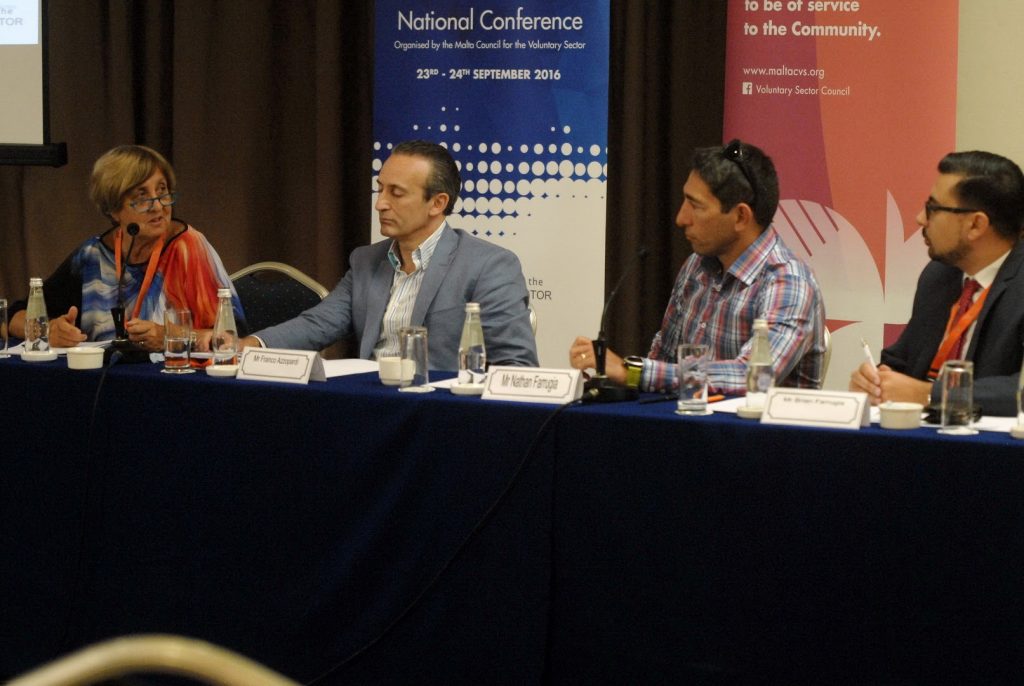 The annual National Training Conference was organised by the Malta Council for the Voluntary Sector between the 23rd and the 24th September 2016 at the Dolmen Hotel, Qawra. The theme of this year’s conference was “Strengthening Volunteer Work – The Local and European Dimension”.

The first day took off with a welcome address by Mr Nathan Farrugia, Chairperson Malta Council for the Voluntary Sector following an address by the Shadow Minister Hon. Clyde Puli. This was followed by a plenary session: “Understanding the 21st Century World of Volunteering” delivered by Ms. Sue Jones, Trainer, Facilitator and Coach specialising in people development and volunteer management. Ms. Jones was the main foreign guest who was invited this year to share her experience with the local audience. This was followed by a very interesting panel discussion moderated by Mr Mauro Pace Parascandalo. The guests on the panel discussion were Mr Nathan Farrugia, Prof. Kenneth Wain, Dr Vanni Xuereb (Head of MEUSAC) and Ms Miriam Teuma (CEO, Agenzija Zghazagh). The 4 workshops were again repeated after Lunch. This was followed by a Plenary Session “ Volunteering in Malta: The International and European Perspective” by Ms. Claudia Taylor-East (CEO, SOS Malta). A discussion was held afterwards with Mr. Brian Farrugia (Director, Ministry for Social Dialogue, Consumer Affairs & Civil Liberties) and Mr. Nathan Farrugia as guest for the Plenary session. This was followed by an introduction and launch the Common Web Portal for Public Funding for VOs, presented by Mr. Mauro Pace Parascandalo.

The conference was officially closed off by the address of the, Chairperson of the Malta Council for the Voluntary Sector, Mr. Nathan Farrugia.