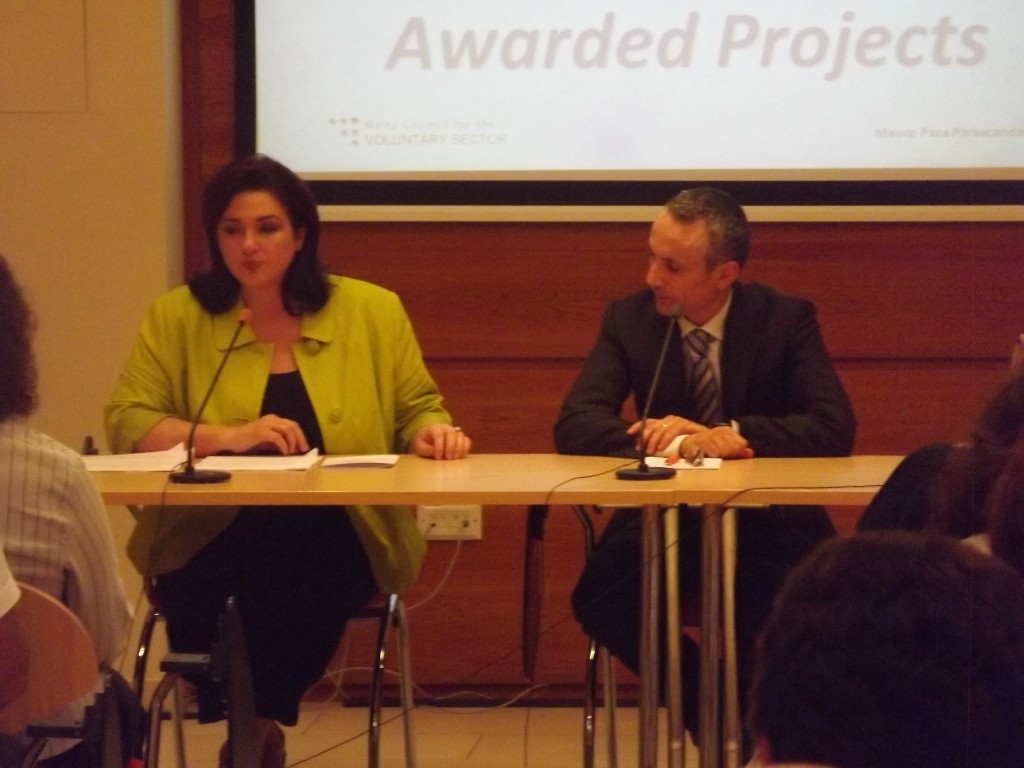 The Grant Award ceremony which was held on the 14th June 2013 at Dar l-Ewropa in Valletta was opened by the MCVS Chairperson Mr. Farrugia.  In his speech Mr. Farrugia gave an overview of the reason why the Scheme was set up and said that the resulting projects are encouraging.  He added that it is the intention of the Council to try and increase the fund for next year’s projects.

The Hon. Dr. Helena Dalli, Minister for Social Dialogue, Consumer Affairs and Civil Liberties,  said that the sense of “civic commitment” of people who dedicate their personal time to voluntary work is based upon the conviction that citizens are especially responsible for those who, for diverse reasons, were inhibited from their civic and social rights, or were victims of sickness, injustice, and misfortune. She said that this commitment is also based on the conviction that other people must be made aware on various issues ranging from disability, prevention of illness, diversity and the need to appreciate the arts.

The Minister said that the government has the responsibility to legislate and introduce measures and incentives to help and support the voluntary sector in its difficulties and challenges. Prof. Kenneth Wain, Commissioner for the Voluntary Sector was present for the event. The organisations that benefited from this year’s scheme were:

Puppets with a conscience

Permanent Exhibition Culture and Tradition of Sailing           in B’bugia

How to lead a harmonious, balanced, connected life   through techniques             for life long Health, Cooperation

Get to know it better. Migrants Integration in the Maltese Society.

75 Years of Football in the Silent City

‘The Origin of Love’

Stop the Violence “Speak out for Girls’ Rights”.

Accessible Literature to All

Foundation for Shelter and Support to Migrants (VO 444) –

Sound is Essential Noise is Not

Publication of the Pocket Guide Book to Mattia Preti in Malta

Malta Council for the Voluntary Sector