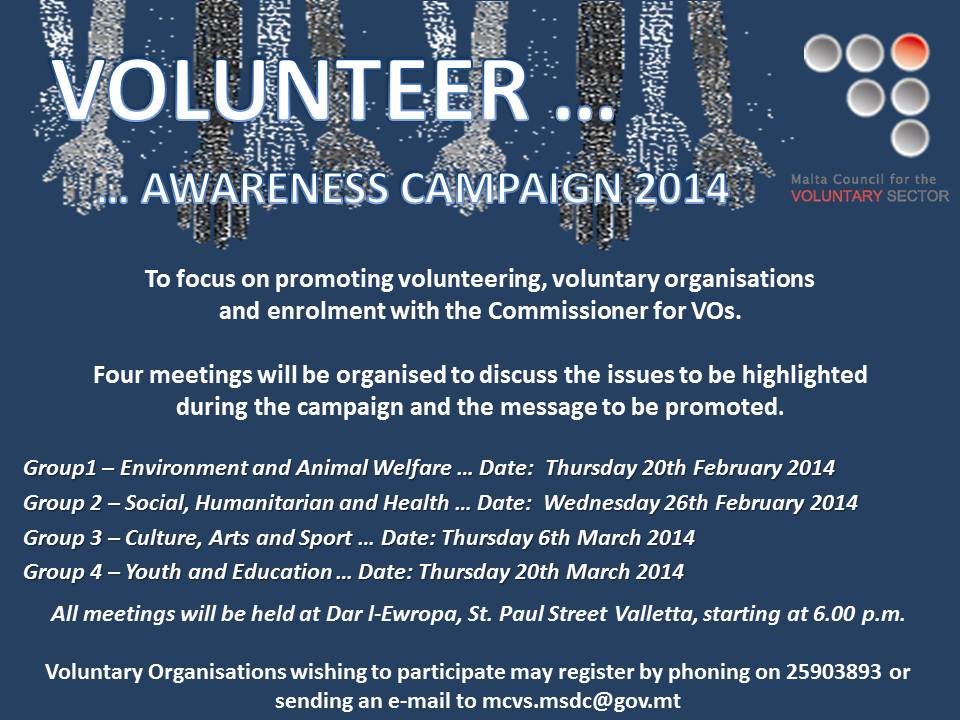 The Malta Council for the Voluntary Sector later this year will be undertaking an awareness campaign.  The campaign is intended to focus on two aspects.  The first is to promote volunteering in general, promoting the work done by voluntary organisations in the various sectors, which work contributes in various ways to the community.  This aspect will also encourage the general public to support the voluntary organisations, not only financially, but also by committing oneself to do voluntary work.

The second aspect of the campaign will be to promote the issue of VO enrolment with the Commissioner for VOs. This aspect is intended to create awareness amongst the general public that enrolment, which is stipulated in the Voluntary Organisations Act, is the best way to give a level of guarantee that the organisation is accountable and is operating in a transparent manner, thus the public should support financially organisations which are enrolled.

The campaign will be divided into three (3) phases. Phase one will consist of four meetings with VO’s which will be grouped as indicated below. The Council is organising these meetings to discuss with the organisations which issues you need to highlight during the campaign and what message needs to be promoted to the public. Organisations may also use these meetings to bring forward other issues or concerns.

The program will be as follows:

All meetings will be held at Dar l-Ewropa, St. Paul Street Valletta, starting at 6.00 p.m.

You are kindly invited not more than two representatives from each organisation.  You are also requested to confirm your participation by phoning on 25903893 or sending an e-mail to mcvs.msdc@gov.mt at least by Monday of the week in which the particular meeting will be held.

We look forward to your participation.